Past and Present of Shiku Temple

home / Culture / Past and Present of Shiku Temple

Past and Present of Shiku Temple

"Staying honest and kind is the only way to stay true to yourself" said by the company founder Chu Jiwang and always as creed to affect others. 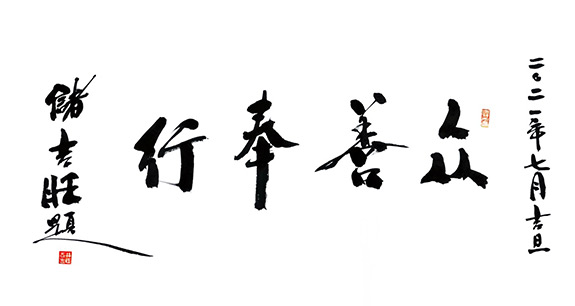 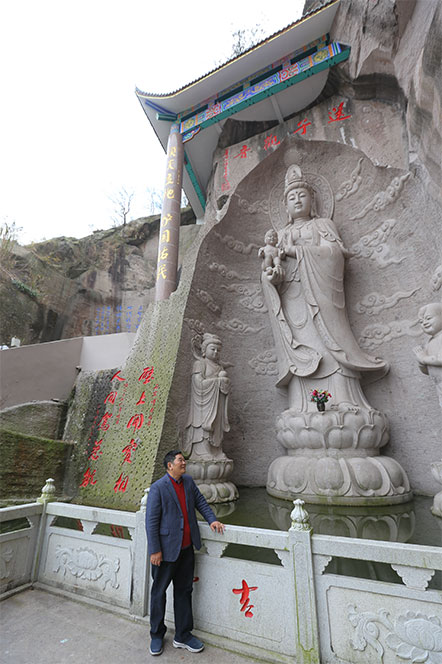 Shiku Temple is built above stone-made residential houses of Lantou village, whose gate is facing south. “Shiku Temple” on blue bottomed plaque is in scripted by prestigious Master Yunguan from Tiantai County. Main room of Manjusri residence lies behind the gate. A statue of Manjusri on a lion is cliff-carved at the center. The statue looks high and solemn; Buddhisattva Manjusri is beautiful and elegant with a smile, holding Ruyi at both hands. A smaller Buddhisattva statue is sitting on his bun, with cross legs and resting hands with a mudra of meditation. The Manjusri statue half sits with crossed legs. His lion is flying with one foot in the air, surrounded by auspicious clouds. Take a closer look, two followers are kneeing down at both sides of the Manjusri statue, like givers.

The lion-riding Manjusri statue is more than 10 meters high. It’s a beautifully carved piece of sculpture finished by several stone masons from Fujian. The statue has won the Golden Prize of Huian International Carving Art Fair, which is a high affirmation of its carving technique. Two vividly modeling Manjusri are on the cliff of each side of the main statue, one of which holding a flaming a sword, another reading scripture…The five Manjusri Bodhisattva is telling that this is the right earthly abode of Manjusri. 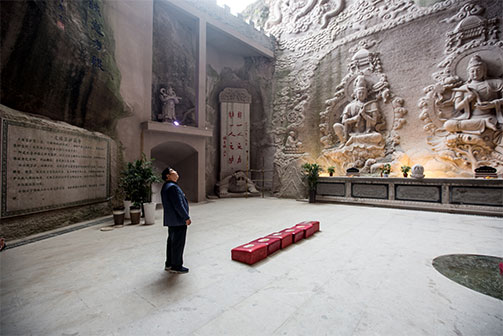 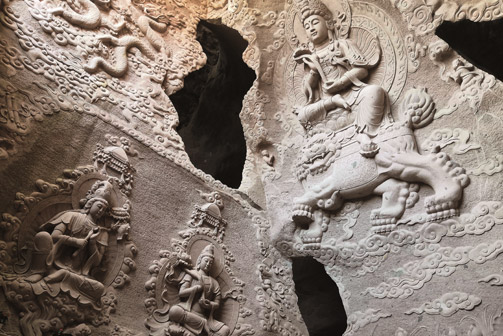 As is known to all, Manjusri is the Bodisattvas who attend Shajyamuni Buddhisattva at left, head of Buddhisattva, representative of wisdom and truth. I have been travelled to his residence at Wutai mountain. Manjusri's Dharma Collection of Dharma Sutra reads, at that time,Manjusri told Guhyapada Vajrah that ‘after my death, I will go to the northeast of Jambu Dvipa. There is a country named Dazhena. There was a mountain in the country, named Wuding.’ Manjusri marched and lived there to preach for all people.” Dazhena is the old name of India to China, Wuding is Wutai mountain.

Poem on My Life By Chu Jiwang

I always hold a belief of mercy, Avoiding evils through the whole life. I love the country and the people deeply, Which makes me respected. Time flies away as season changes, Taking away resentment quietly. I’ve struggled through formidable moments, And buried bitterness and sorrow behind. I beg for a peaceful and prosperous age! May I be wisdom enough to embrace life!

the residence of Buddhisattva Manjusri 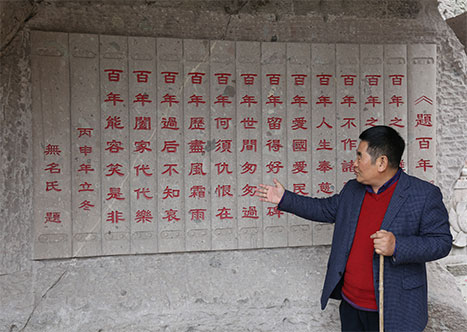 Generations of masons who had been working for hundreds of years will be glad to see the stones they hammered out are now presented as a Buddhist world. The construction of Wushan Shiku Temple has the skill of the miners in the past century. Therefore, on the front wall of the main room, Chu Jiwang inscribed "not one person's power, not one person's work", which solutes both the previous generations masons and today's Fujian stone mason. The past and present of the Shiku Temple is telling a truth that nothing would stay still; what's more, it reveals that miracles are created by men.